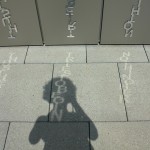 Sun Scroll at midday in June 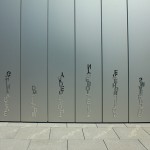 Sun Scroll at 10am in June

The Sun Scroll is a Zen poem revealed on the floor by sunlight. It addresses the theme of transience, emphasised by the fact that sunlight is inconsistent. For the viewer, the potentially fleeting experience of the work can be both a beauty and a frustration.

Although the work has a permanent physical presence, it is continually responsive to changes to the sun’s position in the sky throughout the year.

This work was commissioned by the Manchester School of Art to go on long-term display on the roof terrace of the new art school building as part of the school’s 175th anniversary celebrations. It was awarded 2014 Curator Choice for Fine Art at NOISE Festival by Tim Marlow, Director of Artistic Programmes at the Royal Academy.

Tim Marlow said of the piece:  “A deceptively simple idea which has great clarity of vision and a wonderfully elusive and allusive result. Deftly poetic in its means of expression as much as in its content.”